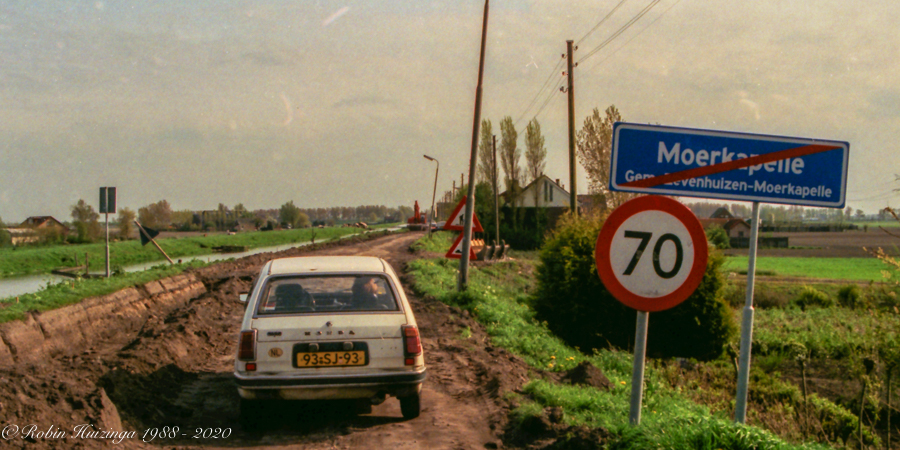 I refer to cars often as an original Dutch car or the opposite, a non-Dutch car. This has nothing to do with the place the car has been manufactured, but with the fact that the car in question has its first registration in the Netherlands. One of the benefits of this, is that you can check whether a car has been in an accident, the mileage is correct and more. But there is one more thing why there is a difference between an original Dutch car and an imported car: the registration number.

The numbering scheme used in the Netherlands, bears no relation to the place of a vehicle’s registration or ownership, and numbers – which are issued in strict time order – identify the vehicle, not its owner. Thus, if a vehicle changes ownership, the registration number remains the same. Because of this strict time order, a car will be issued a registration number that is available on the day the car is first registered in the Netherlands. So, if you import a 20 year old car today, it will have a number that is issued in the year it was imported and not the year it was produced. Let’s take both of my Lincolns for example.

By 2016 we have had nine different combinations of letters and numbers. The a called “side codes”, even in Dutch. I have no idea why it is called that way. The first side code was issued in 1951. In 1951 the provincial car registration system was abandoned due to the fact that people were more frequently driving outside the provinces they lived in. A national system was introduced and a government organization to control this all was erected. That organization, RDW, still exist and you can check any Dutch license plate on their website, www.rdw.nl.

In 1973 side code 3 was introduced. It consisted of two numeric characters, two alphanumeric characters and again two numeric characters. Like side code 2 the sequence was logical, starting with 00-AD-01. But other changes were made. In 1976 the black background op the license plate changed to dark blue and the option of a yellow plate with black characters was introduced. Choosing blue or yellow was an option you could make when you ordered the car, but als it was allowed to replace any Dutch plate with a yellow one. This was was a populair thing to do, because your car looked new.

But another thing was introduced in 1976. Until then there were two size plates. Rectangle and square. But as you can see in the pictures of my parents cars, those did not fit easily on American cars. So the 18.2 plate was introduced. A smaller plate, only in the color yellow, never in black or blue. It was only allowed to use these if it was permitted by the RDW, which ment all American cars produced in 1976 and later. Retrofit was not allowed. If you imported a European or Asian car from the US yourself, the so called grey imported, you could ask for an exception to this rule. The 18.2 was killed by European regulation.

So, even there is no direct relation between the age of the car and it’s registration number, a certain number can look out of time on a certain car. For the red Lincoln it didn’t matter that much. It was only a difference of two years and the ’91 model was not that different from the ’89 model.  On my Mercedes S class, it was a 27 year difference.

For me that is at least very annoying, like a really ugly color on a car. Like brown. But there is more to Dutch license plates that can be very wrong. The color. No, not of the car. A black plate on a car that would never had a black plate when it was new. When side code 4 was introduced, yellow plates became mandatory. So a 1978 or newer car with black plates looks hideous. And that also applies for American cars with black 18.2 plates. These were never used. If you want to use a 18.2, use the proper yellow one. And it is maybe because I grew up with American cars with black square plates, that I really like that on an old Yank.